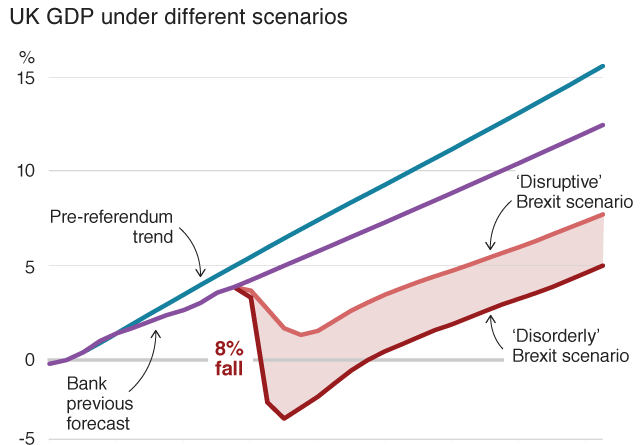 Bangla Sanglap Desk: A no-deal Brexit could send the pound plunging and trigger a worse recession than the financial crisis, the Bank of England has warned.

It said the UK economy could shrink by 8% in the immediate aftermath if there was no transition period, while house prices could fall by almost a third.

The Bank of England also warned the pound could fall by a quarter.

The Bank’s analysis comes after the Treasury said the UK would be worse off under any form of Brexit.

This Bank’s scenario is not what it expects to happen, but represents a worst-case scenario, based on a so called “disorderly Brexit”.

The scenario looks at the five-year period after the UK leaves the EU.

But by the end of 2023, the economy is expected to resume growing.
“These are scenarios not forecasts. They illustrate what could happen not necessarily what is most likely to happen.

“Taken together the scenarios highlight that the impact of Brexit will depend on the direction, magnitude and speed of the effect of reduced openness of the UK economy,” Bank of England governor Mark Carney said.

What happens during this disorderly scenario?
Scenarios drawn up by the Bank of England show that GDP would fall by 8% in 2019 against its current forecast.

Growth would quickly resume and the economy would expand again by the end of 2023 but be smaller than where it was before.

Unemployment would rise to 7.5%, house prices fall by 30% and commercial property prices collapse by 48%.

A less close relationship is one where customs checks start after 2021 and other regulatory checks are put in place.

What happens in these scenarios?
If Brexit is disruptive rather than disorderly, GDP falls 3% over the five years to 2022, house prices slide 14%, and unemployment reaches 5.75%

If a close trading relationship is agreed, the economy could still be 1% smaller than if the UK had remained in the EU but 1.5% higher than the bank’s most recent estimate.

If it is less close, the economy’s growth could be 3.75% less than if the UK had remained in the EU and 0.75% less than forecast over the last inflation report.

These figures cover the period to 2023.

What does this mean for Theresa May?
By political reporter Brian Wheeler

Theresa May will not have told the Bank’s economists what to say in their report but it is definitely helpful to her. The timing is significant too.

A leaked copy of Downing Street’s media grid had today down as “economy”. Tomorrow is “security”.

So expect a steady drumbeat of official warnings about the dangers of a no-deal Brexit in the run up to 11 December’s vote.

Downing Street’s hope is that however much they hate her deal (and they do) MPs will come to view it as the only safe option.

The problem is that these kind of warnings, however well-grounded in facts and figures, are too easily written off as “project fear”. The more scary they sound, the easier they are to dismiss.

What has been the political reaction?
Conservative MP and Brexiteer Jacob Rees-Mogg has accused Mark Carney of talking down the pound – saying the Bank of England’s warnings tonight “lack all credibility”.

And the pro-Brexit former Conservative leader Iain Duncan Smith said: “The bottom line of both sets of reports is that project fear like Frankenstein’s monster has been resuscitated and is stalking the land.”

However, shadow chancellor John McDonnell said: “The Bank has confirmed what other independent reports this week have been telling us: a no-deal Brexit could be even worse than the financial crisis of 10 years ago, and the country would be much worse under Theresa May’s deal,” he said.

What else did the Bank say?
Mr Carney said the Bank was monitoring markets and indicated that it was ready to lend to UK banks if necessary.

He also indicated that banks might be allowed to hold less capital if risks became too great.

But he warned there was little the Bank could do.

“There is little monetary policy can do to offset the potentially significant hits to productivity and supply that Brexit could entail… the future potential of this economy and its implications of jobs, real wages and wealth are not in the gift of central bankers,” he said.

What does it mean for the banking sector?
The Bank of England has exposed seven major lenders to a stress test which it said was two and half times more severe than the Brexit scenarios. 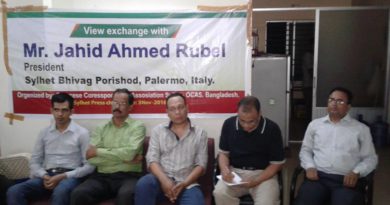 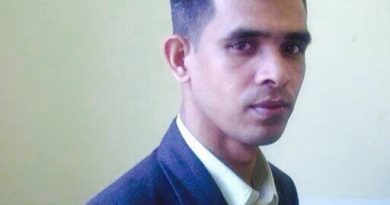 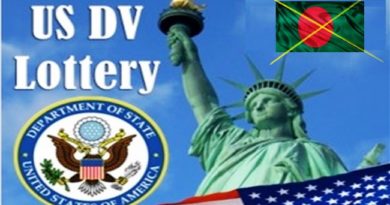