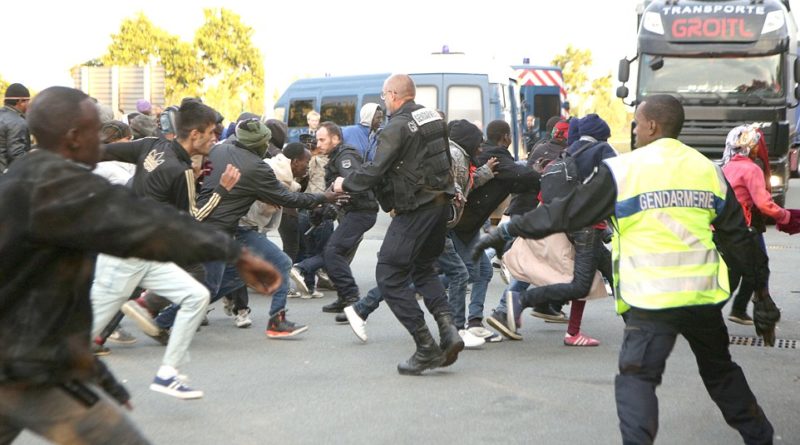 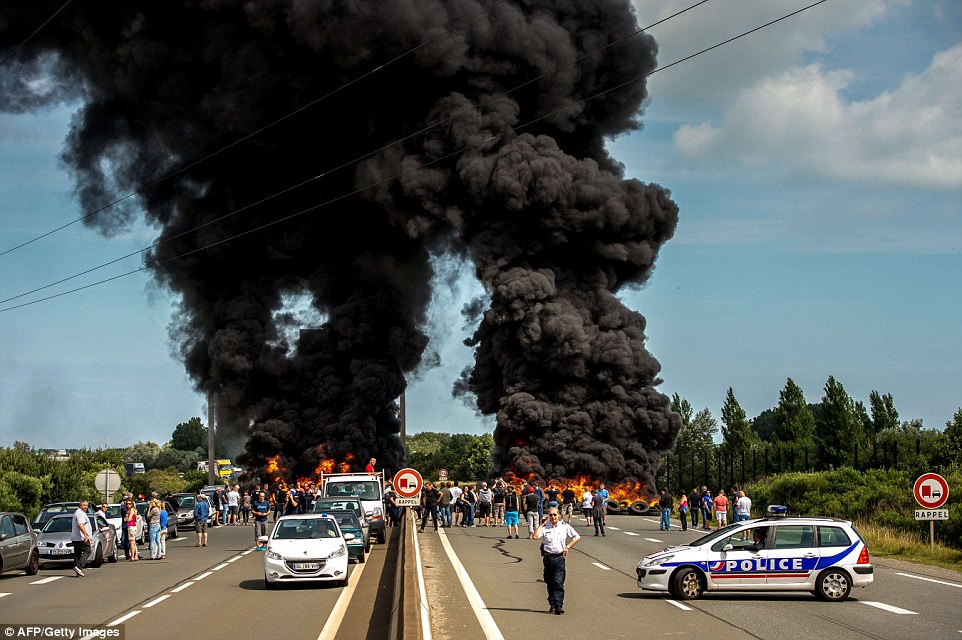 Bangla sanglap Desk:British holidaymakers heading to France have hit travel chaos as they contend with striking ferry workers, the migrant crisis in Calais and Operation Stack in Kent.
Scores of migrants have caused vast disruption at the entrance to the Channel Tunnel in Calais throughout the last week, with the government set to divert people onto ferries to avoid the growing crisis.
But as ministers prepared to hold talks with ferry companies, striking French workers scuppered plans by blocking roads to the port with a wall of burning tyres, bringing traffic to a standstill and causing huge tailbacks.
Alex Chienne was driving through Calais and tweeted: ‘We have been stuck in Calais for hours because these idiots have blocked the whole highway with burning tyres.’
Vehicles are equally stationary on the British side of the border on the M20 in Kent, where Operation Stack has seen hundreds of lorries queue up along the closed motorway.
The crisis in Calais has caused some British families – including an MEP – to cancel their holidays, while others are desperately trying to change their travel plans to avoid the French port.
Hundreds of migrants gathering at the French port have caused huge disruption at the entrance to the Channel Tunnel in Calais, with ministers preparing to hold talks with ferry operators about organising extra crossings to Calais.
But ferries could be affected by the chaos too, with the main route to the French port blocked by a wall of burning tyres constructed by the striking seamen. Traffic was seen building outside Calais this afternoon as the protest caused lengthy tailbacks.
David Cameron has ordered ministers to do everything possible to ‘stop people illegally entering our country and to make the situation better for the lorry drivers and the holidaymakers who face potential delays’. 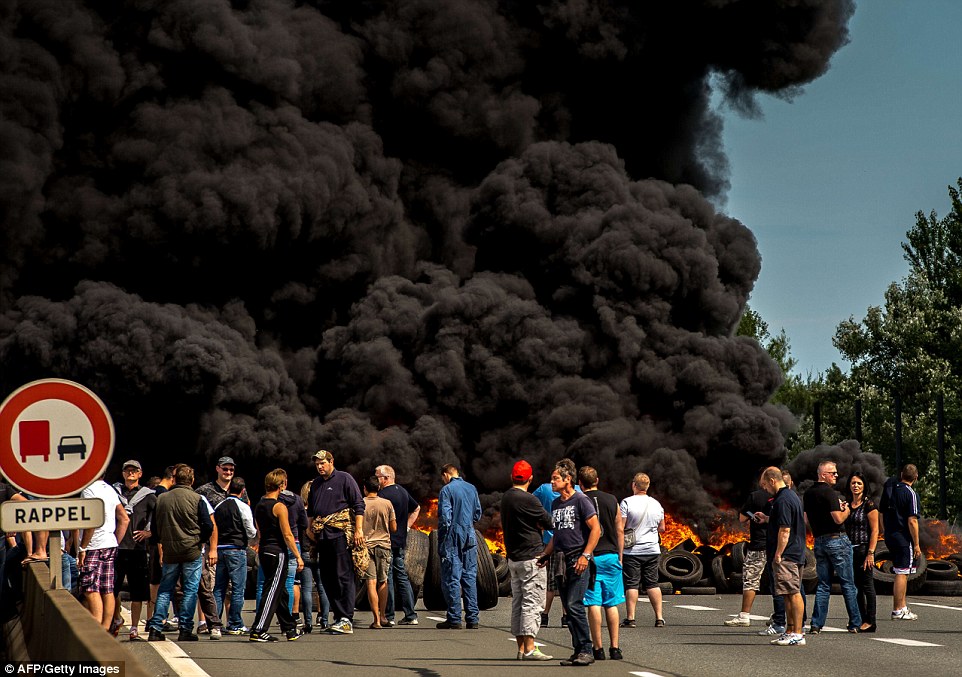 It is understood this will include ‘increasing ferry capacity on different routes’ to help prevent family holidays in France being delayed or cancelled.
‘We will be having those conversations with ferry operators,’ a Downing Street source said.
Dozens of people have complained online about long delays on the Eurotunnel, with others cancelling their trips altogether to avoid the chaos.
Ukip MEP Julie Reid cancelled her trip to France, tweeting: ‘Well our holiday is already ruined. Hubby & I were to drive to the Continent today, via Calais, now staying home’.
Kirsten Hendrich, who runs a jewellery company in Guildford, Surrey, has called off her short break to France with her young family. 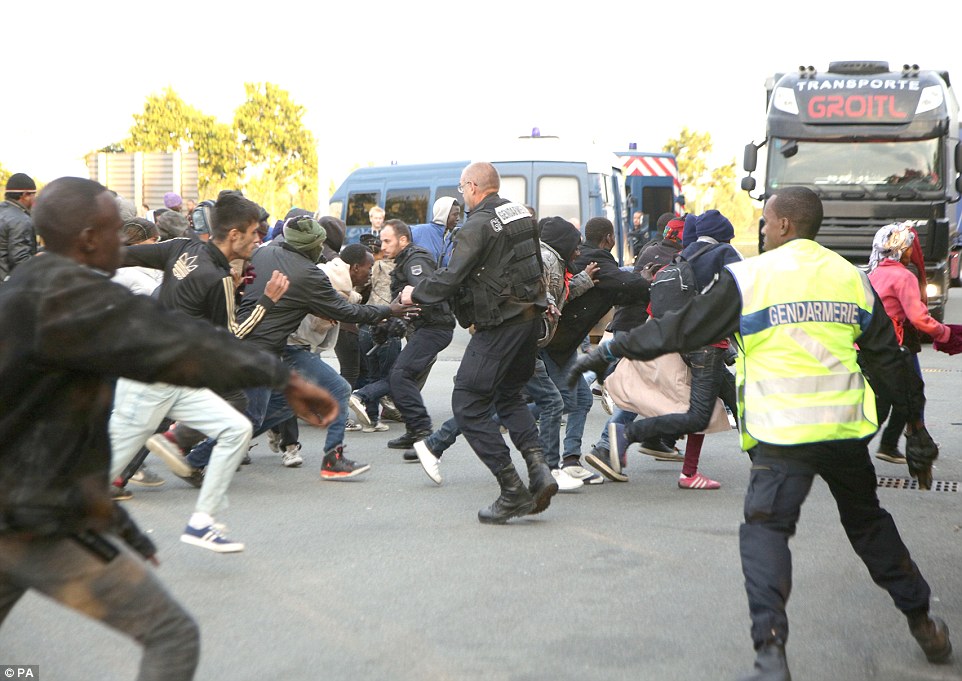 Writing on the Eurotunnel Facebook page, she said: ‘Basically there is no way we are travelling on a late night train with a nine-month-old baby tomorrow night with all the delays for a short trip.
‘We will spend hours in a queue in Kent or in a car park so we feel a refund or date exchange is the only option.
‘Everyone I know who has travelled over the past month has been delayed by at least two hours despite Eurotunnel stating normal service on Twitter.’ 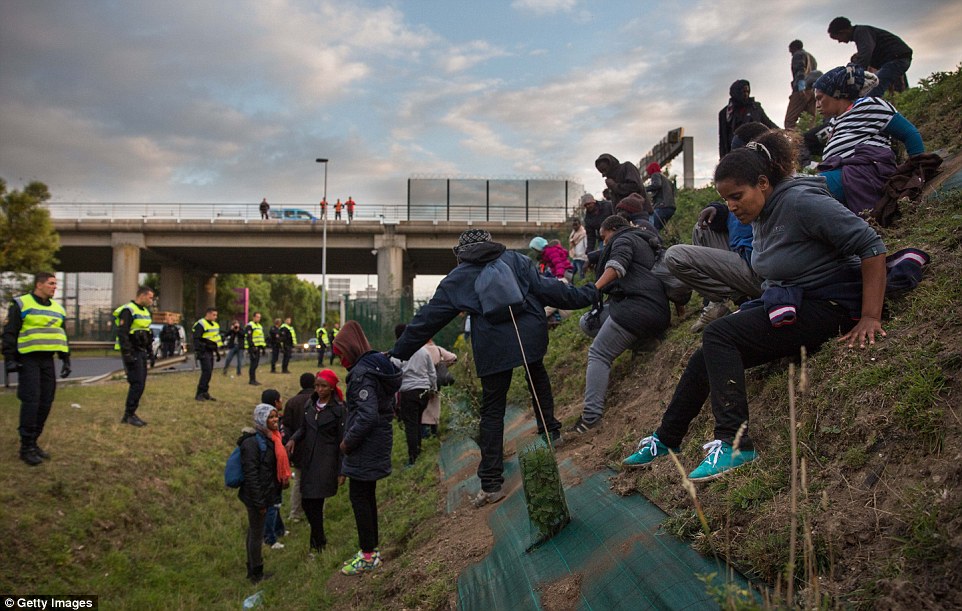 The travel chaos for holidaymakers was sparked by vast groups of migrants trying to get through the Channel Tunnel, with 1,000 attempts to cross the border illegally last night.
Some 200 have succeeding in making it to Britain in the last four nights. However, a dozen immigrants were found stashed in the back of a beer truck on the M20 near Ashford yesterday afternoon while groups were also held across Kent, Sussex and even at M25 services.
Three men were seen slashing a hole in the canvas side of a lorry and running away in Stourbridge, West Midlands. One even risked his life by hiding under a horsebox for two hours.
There have been more than 4,200 attempts by migrants to enter the Tunnel in the past four nights and one was killed after hundreds stormed the barriers on Tuesday night.
The huge delays have led to hundreds of lorries queuing up on the closed M20 as part of Operation Stack – which is causing widespread travel disruption in Kent.
And tourists’ travel issues have been compounded by striking ferry workers blocking off roads to the port in Calais with a wall of burning tyres. 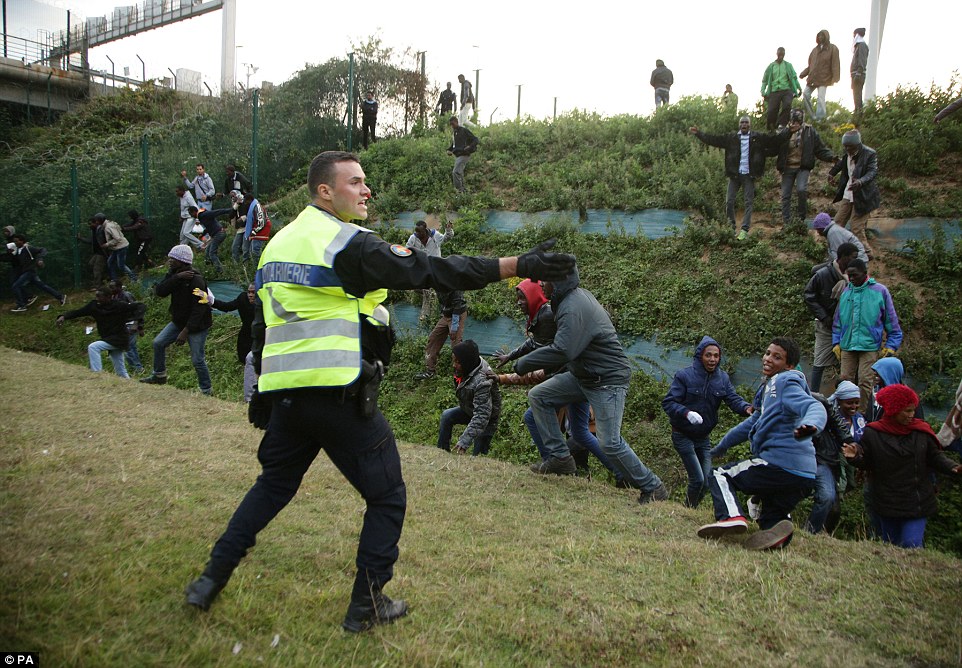 The MyFerryLink employees are protesting over hundreds of potential job cuts after Eurotunnel sold off the arm of its company to Danish-owned DFDS.
Alex Chienne was driving through Calais and tweeted: ‘We have been stuck in Calais for hours because these idiots have blocked the whole highway with burning tyres.’
Janice Hopwood added: ‘Family stuck at Calais due to new industrial action. Gridlocked and hardly moving traffic diverting through Calais Town by police.’
Earlier this week British holidaymakers also had to contend with French farmers spraying manure at unsuspecting motorists, as well as wildfires causing campsites to be evacuated in the south of the country.
Bob Atkinson, from TravelSupermarket.com, said British holidaymakers were looking at alternative routes to France to avoid Calais.
He said: ‘When you look at the ferry-booking traffic, you see people looking at different routes. Western channel routes, such as Portsmouth to Cherbourg, Le Havre, and Plymouth to Roscoff are on the up.
‘With all of these route there may be migrant issues but they are not being reported and are likely to be minor compared to Calais.’
Mr Atkinson added that, despite the chaos in France, families were unlikely to cancel their trips out of fear of wasting their money.
Under pressure: David Cameron looked tired as he arrived back in to UK today, pictured, as he was urged to get a grip on the Calais crisis
+19
Under pressure: David Cameron looked tired as he arrived back in to UK today, pictured, as he was urged to get a grip on the Calais crisis
‘A lot of people will have put a lot of money towards a trip during the summer holidays and will have done so as part of package deals, so will find it hard to cancel without losing their money. If you choose to change your plans then you are likely to lose your money.
‘If you cancel your holiday or change it then you could face maiking up to a 100 per cent loss. You could see at least an additional cost if you change your route.
‘The migrant crisis will affect the impromptu travellers who have looked outside, seen the British weather and thought they’d go fir it.
‘They will face issues on the Eurotunnel who are mainly only honouring people who have made reservations.
‘People should keep an eye on the Eurotunnel website and the Foreign Office site. My advice would be to keep the car locked and leave it secure if you leave the car. Bring extra snacks and drinks to prepare yourselves.
‘Once you get through you may face strike from some farming unions who are blocking some roads. If it happens to you, you will just have to live with it unfortunately.’
Brittany Ferries, which runs daily crossings to Roscoff in France and weekly crossings to Spain’s Santander port from Millbay, saw July bookings increase by 12 per cent on last year.
A spokesman for the firm suggested that the Calais crisis could cause hundreds more people travel through Plymouth’s port this summer. 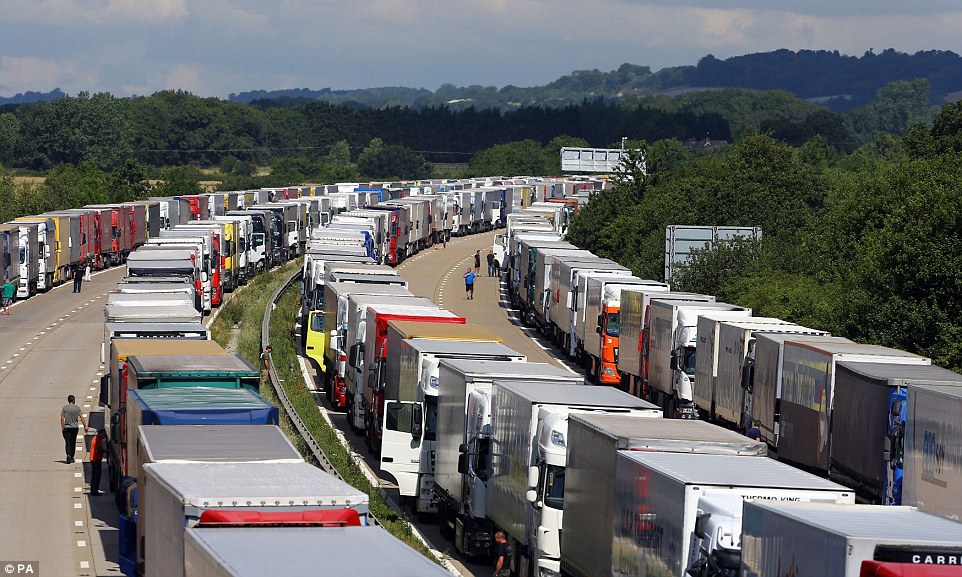 They added: ‘We don’t know for sure, but it could well be that people are arranging their holidays and are watching the TV news and seeing these dramatic scenes.
‘The Foreign Office have put out advice for visiting France which includes people being urged to keep windows and doors locked as they go through Calais.
‘Warnings like that may have an effect on people who might feel they don’t want to go through that.
‘Those people who don’t usually travel through Plymouth, or who have not travelled with us before, hopefully they will continue to travel with us even when the Calais situation has been resolved.’
David Cameron today promised to send extra sniffer dogs and fencing to Calais as he admitted the migrant crisis in Calais will last all summer.
Army barracks in Kent will also be used as a lorry car park to relieve some of travel chaos on the M20 and extra ferry crossings could be laid on to prevent family holidays being disrupted.
Mr Cameron convened a meeting of the Cobra emergency committee this morning after returning from a four-day tour of the Far East.
He said a team of senior ministers will lead the response the crisis, vowing: ‘We rule nothing out in taking action to deal with this very serious problem.
‘We are absolutely on it. We know it needs more work,’ he added.
Meanwhile hauliers called on lorry companies to join him in stopping cross-Channel freight until the Calais crisis was over.
Richard Burnett, chief executive of the Road Haulage Association, told BBC News: ‘Quite simply the measures I’ve just heard from David Cameron aren’t enough, they are just sticking plasters in terms of trying to resolve this problem.
‘The threats these hauliers are facing every day is unacceptable. The impact financially on the haulage industry and the broader UK economy is unbelievable.
‘Until we get the right measures in place and until we actually contain the situation in Calais with the migrants, this situation is a crisis and it’s out of control. I really don’t think these measures are enough right now.’ 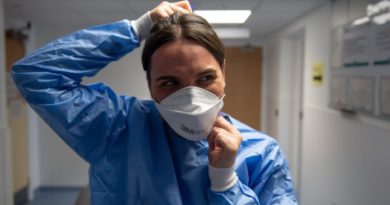 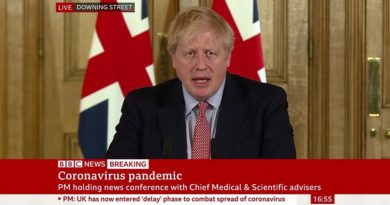 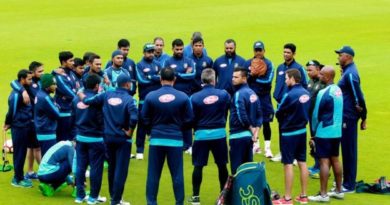